[visibility show=”desktop, tablet, mobile-landscape, mobile-portrait”]If you’ve been around this site for a while, you already know that sex trafficking is on my mind. A lot.[/visibility] Especially child sex trafficking.

It’s simply something that ought never be. I’m as passionate about that as I am about giving women the tools to thrive and think biblically and theologically about their toughest life questions. Hm. Probably more passionate, when it comes to what really gets me and moves me to tears, every time, without fail. Today, though, I wanted to brag on my husband, David Eastman, and tell you about something he participated in this week.

Many individuals and groups at the school where David is a professor of religion, Ohio Wesleyan University, have been true to OWU’s roots by being remarkably concerned about modern slavery. OWU has a long history of abolitionist and civil rights agents of change.

Two nights ago, David and history professor Barbara Terzian had the privilege to speak at a film airing and discussion of  “Slavery by Another Name,” which originally aired on PBS. This film and the event are both part of a National Endowment for the Humanities grant-supported series called “Created Equal: America’s Civil Rights Struggle.”

I missed the event, because we’ve already used up our babysitting money this month. And, since he was speaking, well, I decided to let him go. Although he probably would have wanted me to go, if it were up to him. But because he’s my husband and I have the all-access pass to him, I milked him for all the details. Here’s a little of what he told me (produced here thanks to the joys of iPhone texts):

Some of what I talked about goes back to the 19th century. Methodists were very involved in abolitionist movement in the north, including the second president of the University (Merrick, for whom Merrick Hall–the old building being renovated now–and the annual big religion lecture are named) and Lucy Hayes, who attended Ohio Wesleyan Preparatory School, because she was female and could not get in to the university at that time. She went on to marry Rutherford Hayes and become the first lady.  Frederick Douglass also spoke in  Delaware, as the plaque downtown commemorates. 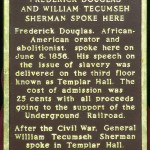 Honestly, I think this is a topic that deserves more attention than it has received. Of course, I highlighted Kelsey Thornton, Faith MacDonald, and Mimi Abrams* as modern-day abolitionists.

*Kelsey and Faith are current OWU students and Mimi graduated last year. They’ve also been a part of our family’s life to different extents, and Kelsey and Faith assisted me in a WARChest Party event series last year (which I’ll be doing just before Mother’s Day again this year, so watch for it!). All three have faithfully engaged long-term in anti-human-trafficking events, initiating the majority of those events themselves. Many other OWU students, faculty, and staff are awake to the issues and are moving and shaking others to wake them, too. 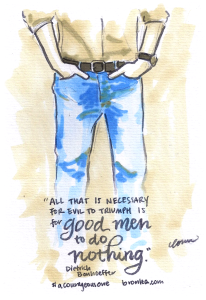 So, it blesses me that my husband desires to shine a light on issues that will protect the unprotected —the alien, fatherless, and widow; the kidnapped, sold, or tricked. I’m not going to toot his horn any more, because it’s not his style to be fawned over, even by me. But I hope you’ll be encouraged by his courage and humble ways of helping fight something no one person can fight. We have to spur each other on toward these particularly untasteful-in their-necessity, but good deeds.

Think it doesn’t happen in your back yard (whether literally or figuratively)?

Survivor’s Ink Story
Now…I really want you to know about this one. You HAVE to watch the video there on Jennifer Kempton in Columbus, OH – such redemption, such restoration, such grace, such a woman! Hallelujah! Watch how she is; watch who she is. She is so beautiful. This is a brand new ministry in the scheme of things, so please support it if you are able. Every bit of money shared will help women recovering from a life they never asked for reclaim their own person—physically, spiritually, and ideologically.

Work in the direct healthcare industry, particularly in a hospital, clinic or practice?

Chances are very good you’ve met someone who’s trafficked but you had no idea. Read the story of Dr. Jeffry Barrows, an ob/gyn and the man who founded Gracehaven.

Want information, training to recognize the clues, or to dive right in to help?

Gracehaven’s resources. Be sure to scroll down to get the article “22 Things You Can Do to Fight Human Trafficking.”

Truckers against Trafficking have a robust training program.

[box style=”1 or 2″ background=”IMG URL or Color Value”]God bless you if you’ve read this far. May our Lord move in your heart to show you what you, dear sister or brother, can do to bring some small measure of his justice into the world today.